Over 5000 members of the public attended a Saturday Family Fun Day in Edinburgh, UK, as part of the Edinburgh International Science Festival in April 2018. The MAZI project was there to show off examples of Do-It-Yourself networking, including interactive HTML games and activities built by Edinburgh Napier University students. The day was extremely busy, with many children and their families trying out the MAZI networking demos, hosted on Raspberry Pis running MAZI Zones, and learning about local WiFi networks, coding and creating projects with a Raspberry Pi. 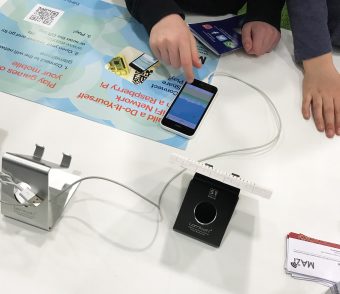 MAZI took part in the festival event, organised by Heriot Watt University, alongside many other researchers, showcasing their scientific work to a wide audience. Edinburgh International Science Festival, founded in 1989, aims to inspire people of all ages and backgrounds to discover the world around them. The annual Science Festival: the world’s first public celebration of science and technology is still one of Europe’s largest.

The two-week festival gives audiences amazing experiences through a diverse programme of innovative events. Alongside the annual festival in Edinburgh, the organisation has a strong focus on education and runs a touring programme that visits schools around Scotland throughout the year.